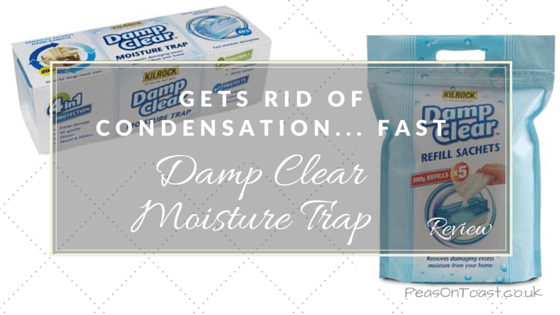 Fed up with condensation on your windows and walls? Damp Clear Moisture Trap review

NOTE: Kilrock provided Damp Clear Moisture Trap for this review. However, the words are my own and reflect my honest opinion.

With condensation on your windows and walls, it becomes a daily battle to keep them clean, dry and moisture-free.

If your window frames are wet, you already know what’s involved – and you’re probably keen to find the answer.

Great, this Damp Clear Moisture Trap review is for you!

I remember staying at my gran’s house and seeing her wipe the windows with a cloth each morning to get rid of the condensation. 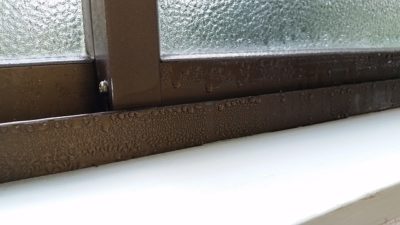 Years later, when I moved into my house, that daily ritual soon fell to the wayside and I let the condensation “happen”.

It was especially worse in the kitchen and bathroom due to the hot cooking and bath water temperatures.

If I opened the windows for ventilation, the change in temperature would cause a puddle of water on my window sill. 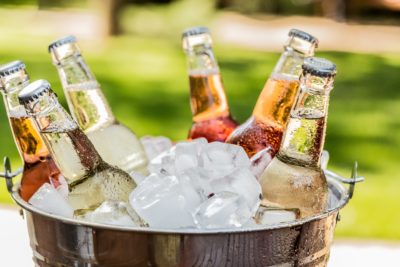 For example, condensation appears on bottles of drink if the outside temperature is warmer than the bottles in the ice bucket.

That’s when you see the condensation.

What happens if you don’t wipe the condensation away?

Condensation’s the most common form of dampness found in both old and new-build houses. It’s caused by a lack of adequate ventilation – the more time we spend making our house energy-efficient with double-glazing and cavity wall insulation, the build-up of moisture and humidity levels increase.

However, if you leave condensation without wiping it away or without dealing with the underlying cause of dampness, ie better ventilation:

What’s the best way to get rid of dampness caused by condensation?

Unless you’d prefer the cost of a permanent solution to get rid of condensation, such as installing a condensation control unit to ventilate your house, here are a few short-term fixes:

or you could choose the easiest, effective option: 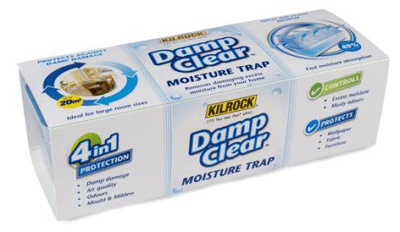 I’ve been using Kilrock’s Damp Clear Moisture Trap for just over a month – scroll down to see the amazing results.

Kilrock Products Limited is a UK company based in Chesham, Buckinghamshire – tagline: “It’s the One that Works”.

TIP: how did I first hear about Kilrock? I bought Kilrock's Grout Shield to clean my kitchen and bathroom grout. I ended up recommending it to everyone - after all, who doesn't have dirty tile grout to clean?! See my review with photos showing how well Grout Shield worked.
Specialising in industrial water treatments since the 1930s, Kilrock successfully diversified in the late 1980s. It now distributes over 40+ products (including Damp Clear Moisture Trap) across a number of core categories, sold by most of the UK’s top chain and independent stores.

What’s Damp Clear Moisture Trap and how does it work?

TIP: the calcium chloride crystals are safe to handle when used sensibly. As with many household products, you’re advised to wear gloves whilst handling and/or to wash your hands in case of accidental eye contact causing serious eye irritation or damage.

Calcium chloride is hygroscopic to attract and hold the water, collecting it in the base of the container.

After you’ve set up the container and poured in 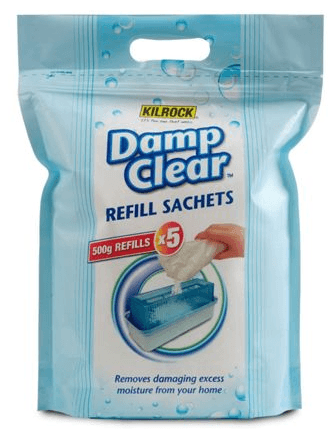 the crystals, it starts absorbing the condensation immediately – you need do nothing else until it needs replacing a few months later.
Depending on the level of condensation, the Damp Clear Moisture Trap lasts approximately three months. By which time, the container will be full of water and the crystals will have disappeared.

Compared to less expensive methods of getting rid of condensation (eg cheaper condensation traps costing about £1 to £2), Kilrock’s Damp Clear Moisture Trap’s still excellent value for money. In comparison, it contains over 10 x the amount of calcium chloride crystals and lasts for a few months rather than the cheaper version’s few weeks and yet it’s only £4 to £5! 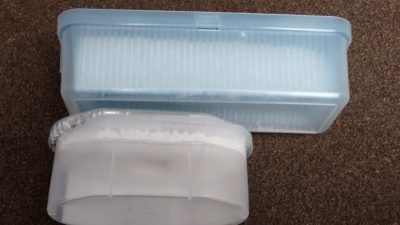 The white area shows the crystals – see Kilrock’s Damp Clear Moisture Trap [the blue container] full of crystals with a container twice the size of the cheaper alternative [the white container], which had just a thin layer of crystals near the top

The Damp Clear Moisture Trap is:

How to set up and use Damp Clear Moisture Trap 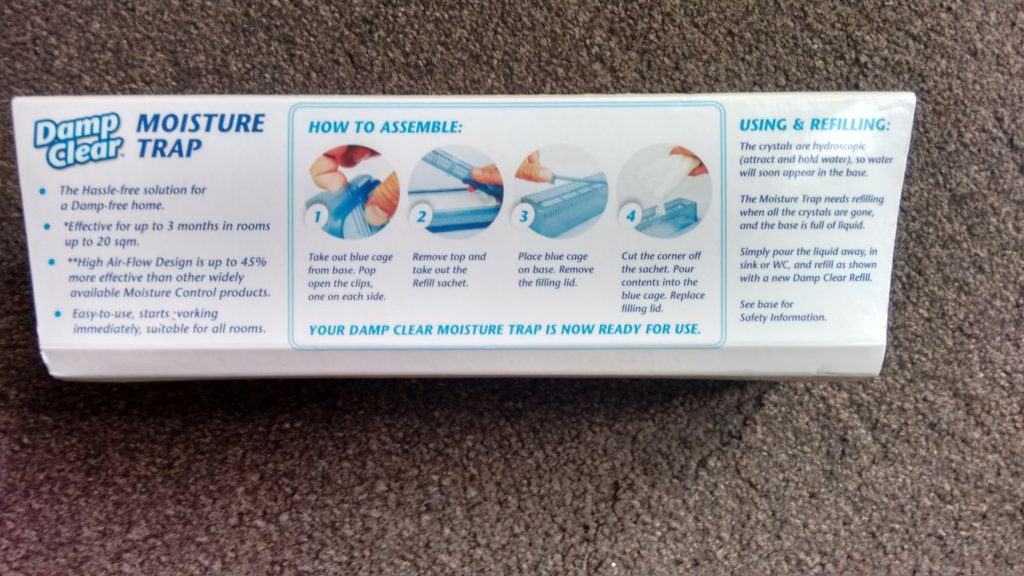 There’s a few steps involved in setting up Damp Clear Moisture Trap (basic instructions are on the side of the packaging), but once done, it’s a case of leaving it to do its job.

Here’s step-by-step pictures, showing how easy it is to set up: 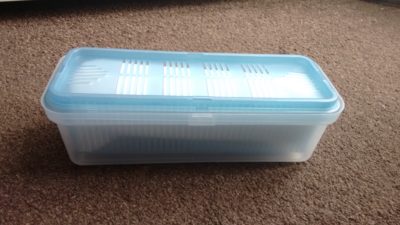 1. remove the Damp Clear Moisture Trap from its cardboard packaging 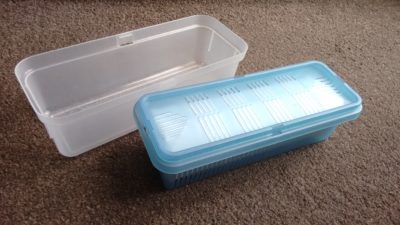 2. lift out the blue plastic cage from the white container 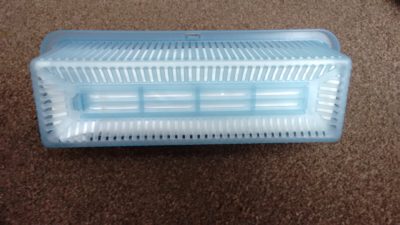 3A. turn the blue cage sideways to see the little catch under the rim on each side – gently push those towards the edge of the rim to remove the blue cage lid 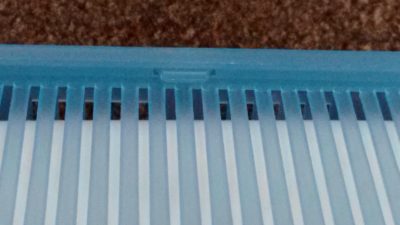 3B. a close-up of the little catch to undo the lid 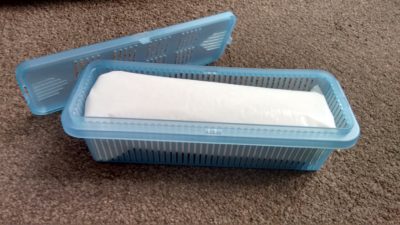 4A. you’ll see the packet of calcium chloride crystals inside the blue cage 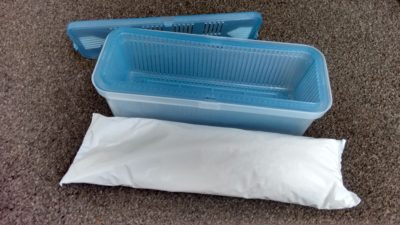 4B. remove the packet and cut the corner, wearing gloves 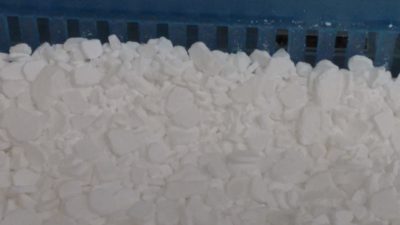 5. empty the packet of calcium chloride crystals into the blue cage 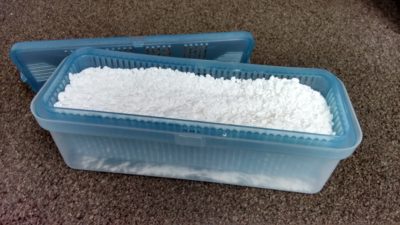 6. place the blue cage into the white plastic container 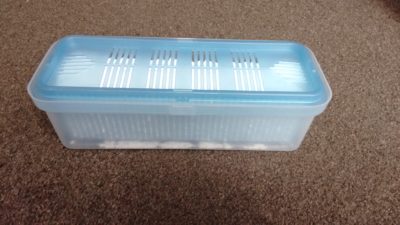 7. place the lid on the blue cage, ensuring it’s properly closed under the rim, and place it in a stable position to start working – you’ll notice that some of the crystals fall through the cage into the container… that’s fine

What’s it like using Damp Clear to get rid of the condensation? 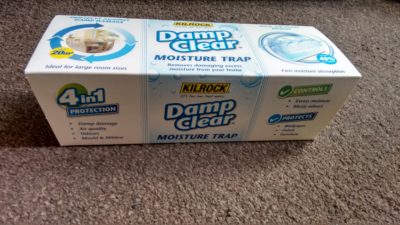 As I mentioned, my windows in the kitchen and bathroom often have condensation with water droplets collecting on the window sills.

Over the years, this has led to the old wooden window sills having a bit of mould trying to grow in the corners! Yes, gross… and how lazy of me for not dealing with this sooner.

TIP: although the Damp Clear Moisture Trap is blue and quite large, my family didn’t question what it was nor did they ask for it be removed… so I guess it isn’t too unsightly.
However, I’d still prefer it to be slightly smaller and of a clear plastic rather than blue, so that it blends into the background a bit better.

I didn’t even know until recently that such a product as Damp Clear Moisture Trap existed to get rid of dampness caused by condensation. But, you’re right, I should still have been wiping away the condensation…

I’d only ever heard of using dehumidifiers which seemed a bit excessive (and expensive) for just a window, unless you’re renovating, plastering and painting, or drying the house from a flood or burst water pipe.

When I realised that Damp Clear was a cheaper alternative, I was keen to use it in my bathroom to get rid of all that condensation. I followed the instructions and quickly set it up ready to place on my bathroom window ledge.

TIP: if at first Damp Clear Moisture Trap doesn’t appear to be working, just set it up again.

When I first used it, I was disappointed that my windows still had just as much condensation. Why wasn’t Damp Clear working?
I knew from having read other reviews that it usually works well, so I removed the lid, lifted the cage from the white container, gently moved around the calcium chloride crystals (as some were stuck together due to the bathroom humidity), replaced the lid and put the cage back into the container.
I don’t know that it differed to how I originally set it up, BUT when I returned to my bathroom an hour later, Damp Clear was working, the condensation had disappeared, and it’s been like that ever since!

I’d usually open the bathroom window each morning and notice water droplets of condensation on the window frame.

since using Damp Clear Moisture Trap, the window and window frame have been totally dry.

I’m very happy with the results and at just under £5 for a Moisture Trap including one refill sachet, it’s well worth the price.

Where can you buy Damp Clear Moisture Trap?

Damp Clear Moisture Trap averages between £4 to £5 (including one refill sachet) and the refill packs (2 x 500g sachets) cost about £4, whether you buy direct from Kilrock, or from other stockists such as Amazon, Wickes, Wilkinsons or Homebase.

Note: this review is a general resource, not intended to be professional advice. 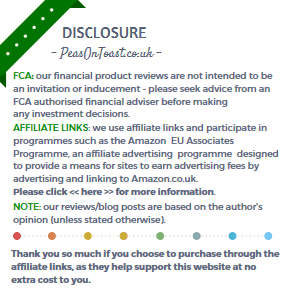